Female football is one of the fastest growing sports in the world. However, the sport is facing several challenges. Female football across Europe is still not very diverse in terms of ethnic background. Are football structures excluding minorities? How have players with a migrant background overcome barriers?

These current topics are covered by a special edition of “W”, the women’s football magazine of the Portuguese Players Union. In the framework of the ERASMUS+ project SPIN Women, the 60-page magazine has been produced in English and Portuguese.

It was created for and about women, featuring powerful stories like Jennifer Fri, a former football player and now referee in Ireland, or Cynthia Uwak, two-time African Player of the Year who ended being rejected by her own country, due to her sexual orientation. Khalida Popal also has a story to tell, that begins as a little girl who should not play football in the streets according to the strict cultural standards in Afghanistan, a situation that not only didn’t improved, but it also turned for the worse, as her life started to be threatened. Today she runs the Girls Power Organization in Denmark.

The cover story portrays the rising star of the Portuguese national team, Jéssica Silva. After her first season at UEFA Women’s Champions League winner Olympique Lyon, she gave an exclusive interview. Growing up in Europe, with African roots, she had to overcome struggles before arriving on top of the professional game. The 26-year old talks about the importance to have someone who believes in you and giving proper support, even when the opportunities are not the same for minority women.

The president of the SINDICATO DOS JOGADORES, Joaquim Evangelista, says:
“The “W” magazine is back and in a special way. In the first edition since COVID-19, with all the inherent difficulties. W was produced in the context of the SPIN Women project. The magazine has been created in the spirit of giving voice to the project and to present life stories, institutions and initiatives related to the social inclusion of women through sport, especially those from minorities or less privileged backgrounds. It was in that context that we identified overcoming stories, at a national and international level. We are proud of the “W” project, the first communication project in Portugal to be exclusively dedicated to women’s football”. 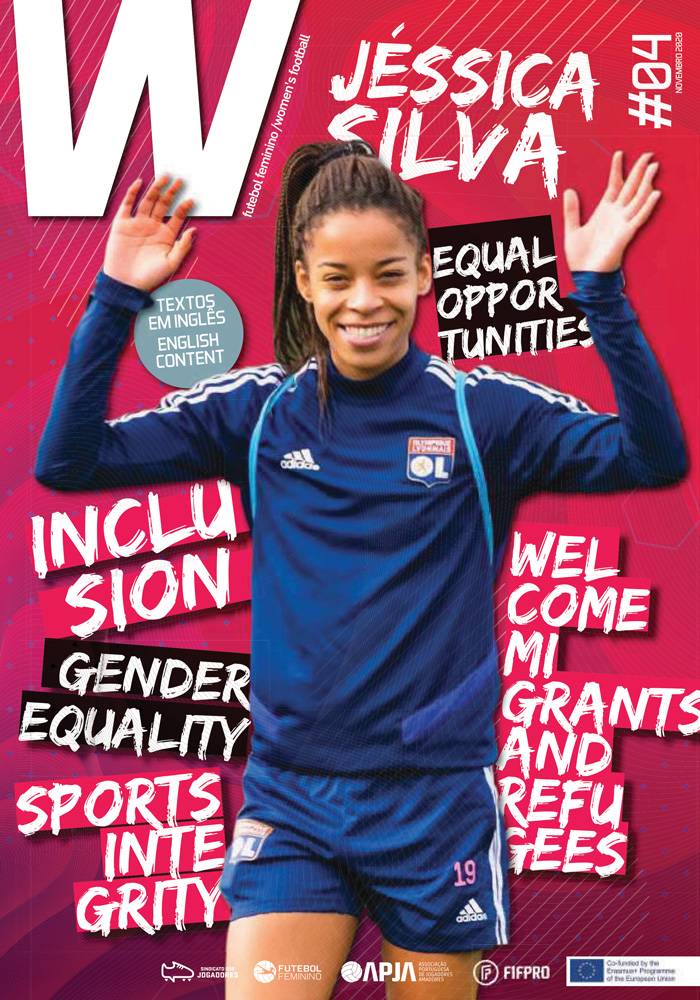 “A white girls sport?” – Online Launch of the magazine

The new “W” magazine has been launched on 16 March as part of the public webinar “A white girls sport? Looking for diversity in women’s football” hosted by the Portuguese Players Union SJPF. At the online event ex-football stars including Cynthia Uwak, Portuguese record national team player Carla Couto, and the former captain of the Afghanistan Women’s National Football Team, Khalida Popal talked about the situation of minority and migrant women in football and shared their personal stories.

Get your hard copy for free

The publication is an Output of the Erasmus+ project “Sport Inclusion of Migrant and Minority Women” (SPIN Women), where achieving gender equality in sport through participation, empowerment and breaking down barriers is key. To order your free hard copy of the magazine, please write an email to fairplay@vidc.org, don’t forget to provide your postal address. Postage within the EU is free.

Look inside the magazine on YouTube!
Link to “W” magazine